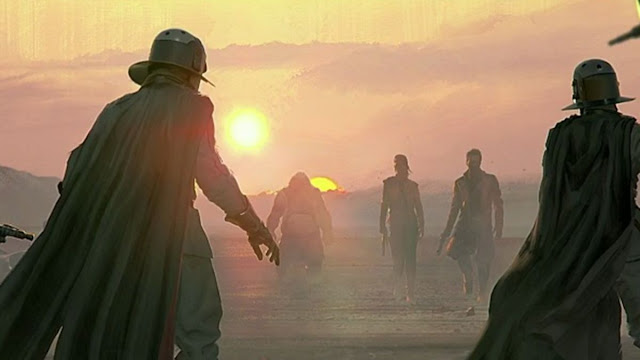 *This was a Quora submission that I wanted to keep an eye on, given that in 1981, I correctly predicted the ending of The Return of the Jedi.*


This is the hardest Star Wars movie to predict, and I think that is great. I liked The Last Jedi, it wasn't perfect but I enjoyed the twists.
To answer the question I'd speculate in much broader story-telling terms.
Johnson seems to be preparing us for a finale that breaks out of the cycle, the way that the Matrix trilogy did. In the Matrix, Neo discovers that he is only the latest permutation in a long-running cycle - which is never resolved, only rebooted/continued. In the third movie, Neo chooses a "third way" and breaks the cycle.
Breaking the cycle
I believe that Rose and Finn's brief discussion with DJ about the true nature of the conflict teases the possibility of a similar third way by which the Star Wars might end. They briefly confront the fact that the pendulum of galactic conflict is hanging off a larger mechanism made from powerful brokers and commercial interests, something like America's supposed military-industrial complex. It may be that in the end, the heroes win, not by blowing up a super-duper-mega-battle station but instead pull back the curtain and stop the war machine. Ultimately, a faceless corporate entity may need a face, an as-yet-unseen antagonist - a clone Palpatine or Darth Maul would offer some satisfaction in terms of being anchored in the greater story, but it would feel cheap.
Luke's rejection of the Jedi is just a different manifestation of the same drive to break the cycle. In Luke's eyes, the Jedi and Dark Jedi represented another cycle that must be broken for the Galaxy to be freed from conflict and turmoil. Maybe he sees the Jedi, not as a duality but a false dichotomy
The Force finally gets out of bed
Snoke talked of sensing an "Awakening" of the force. We assumed that this was centered around Ray, but the Last Jedi's coda finally reveals that this is something much more momentous. Children are being born with innate force powers. This left me with a sense that the final battle may be
Rebellions can trigger uprisings
At the end of The Last Jedi, a call is made to Resistance sympathizers across the galaxy to come and help - but nobody comes. This keeps the pressure on the heroes and ensures that it is Luke's intervention that carries the day. However, it may be a prelude to a new kind of Rebellion, a massive uprising. With the Resistance effectively crushed and the First Order teetering on the edge of a leadership crisis, it seems likely that we won't see a significantly reconstituted resistance, even if the rumors are true that the next chapter will jump ahead maybe years forward in time.
Lando is back - Remember the rule, kids. Classic trilogy heroes are now strictly torch bearers -- it's not their story, so don't expect Lando to drive the story along. So much fan rage seems to come from not remembering this rule. Likewise, Leia will only ever play a role that guides the heroes.
Force Ghost Luke - It's no longer about training Rey if it ever was. In the end, Yoda and Obi-Wan never completed Luke's training, instead, they are like Hamlet's Ghost, sending Luke upon a road, one that should have lead to a confrontation with and destruction of Dark Vader. Luke rejected this road and victory came from an unexpected direction. This time, it doesn't feel like Luke will be driving Rey to a confrontation, it could be that, instead, Luke is focused on haunting Ben, who, like Sméagol /Gollum may be an evil seed, yet one that germinates the destruction of the First Order.

Popular posts from this blog

Letter from the edge of Christmas

December 12, 2018
Okay, calling this blog entry a "letter" is maybe a stretch, but this definitely feels like the edge of Christmas, given that tomorrow I have my office Christmas party and Clara has hers on Friday. For the first time ever, I started my Christmas shopping in November, although that didn't stop me from waiting until the day before the work party to by my secret Santa gift. The promise of a return Tabletop Role Playing Games! Stranger Swedish Things  I bought a game big game book, based on a long-time love of the work of artist Simon Stalenhag, who inspired many with his paintings of the rural Sweden of his childhood, chock full of giant robots and rusting futuristic metal hulks. Tales from the Loop is an old-school table-top role-playing game, in which you play young teens who solve mysteries in an alternate history 1980s where certain technologies blossomed, giving the world fusion, giant robots and mysterious particle accelerators which appears to be caus
1 comment
Read more

March 30, 2017
We've arrived.  After more than a year without a website, my escape pod has finally landed, here at Google's blogger service. It's all fine. Just a few cobwebs from the space spiders. A brave new world.
6 comments
Read more

April 07, 2021
We experienced a temperature delta of greater than 20 degrees over the last few days. Here is the angry sky during the current temperature valley. Those vertical plumes above the distant hill are sleet/hale showers falling from the  cumulonimbus monster.
Post a Comment
Read more